1. Welded tubes (round, square and rectangular)

Steel seam tubes are made of "infinite" hot-rolled and cold-rolled steel strips whose thickness corresponds to the thickness of the wall of the future tube, and the width to its circumference. The tape is lengthwise penetrated through a special matrix that gives it the shape of the tube. Then the longitudinal welding of the pipe, calibration, cutting to the required length, normalization, sorting and packaging are followed. These pipes have a wide scope of application. They are used in the production of metal haberdashery, for general mechanical, locksmithing, auto industry, steel structures, agricultural industry, construction of scaffold structures, furniture production and the like.

The technological process of making steel seamless tubes consists of three steps: the production of a hollow body (shells), the production of tubes from the shell and the final operation. The most famous procedure for obtaining a hollow body is the so-called Mannesmann's method using a pair of twin cone rollers rotating in the same direction. Between these rollers, a glowing steel ingot is passed which, in addition to the rotary, also receives a translatory (rectilinear) movement caused by the rolling position of each other. Because of these two movements in the middle of the ingots there is a separation of the metal. The throat enters the resulting aperture, so that the rolling wall of the shell is reached between the spike and the rolls. The processed cuffs are then re-warmed into seamless tubes, where the walls form, and the tubes are elongated at the same time. The process is performed by means of calibrated rollers and mandrels. The distance between the rollers is determined by the outer diameter of the tube, and the diameter of the pins is internal. Final operations consist of reducing the tube by rolling, calibrating, handling, cutting and packaging.

Seamless tubes are also known as "gas pipes", because they are mainly predicted by the flow of different fluids. They bear higher loads, have better mechanical properties and a high degree of safety.

The galvanized tubes are resistant to corrosion. We offer galvanized tubes with thread (thick wall) that are mainly used in plumbing and flat tubes (thin walls), which are used in the construction of greenhouses, traffic signs, etc.

These are black seam tubes which, as the title says, are waterproof at a pressure of 50 bar. They can therefore be used for fluid flow in smaller systems and installations.

ZP profiles or profiles for construction locksmiths are made in all possible forms, thus meeting the special requirements of the designers. In Euro-metals are offered ZP-L, ZP-T and ZP-Z profiles. They feature a large dimensional precision for locating locks. They have a good surface condition, which provides a suitable base for applying corrosion protective coatings.

Leader in the BiH market of metals and structural steels

New investment of Euro - metal: An industrial hall of 5.500 m2 is being built 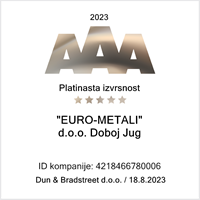 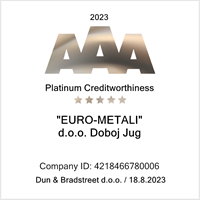 With over 12 years of experience in the trade of products and semi-finished products of ferrous metallurgy, we are pleased to say that we are one of the leaders in the BiH market in this segment. Give us your trust and see why we are the best in what we do.